Home>News>April Newsletter: ‘The Times They are A-Changin’ – (*B.Dylan)
Back to news

April Newsletter: ‘The Times They are A-Changin’ – (*B.Dylan) 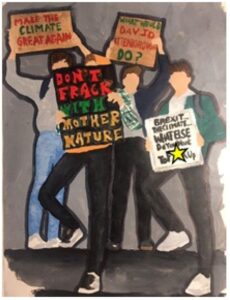 In 1964 Bob Dylan released his classic song, but it seems even more appropriate today than over fifty years ago. Certainly, the speed of change is accelerating in this digital age and for investors this makes the opportunities greater, albeit the dangers larger. As Dylan’s song ends with the warning “the order is rapidly fadin’…and the first one now will later be last. For the times they are a-changin“.

Leading the change is Generation Z, born from c.1995 onwards, who have not known a world without the internet, where smart phones and social media are at the centre of their lives. This emerging group approaching adulthood, is replacing the Millennials and Baby Boomers as the dominant force in society. As any train journey reveals, the passengers are no longer reading newspapers, chatting or admiring the views, but focused on their phones, probably on Instagram (Facebook and Twitter are already passe for the young), linked to the outside world, or streaming the latest most popular entertainment. This world is global, in a way earlier generations would not recognise.

In this online world ideas develop very quickly for better or worse, led by Generation Z, with over 1bn monthly users of Instagram driving rapid change in consumers’ views and habits. In the UK it is most obvious in the way evolution has become revolution when it comes to the environment. Climate change has been on the agenda for many years, but suddenly consumers’ habits are evolving quickly, in areas such as plastics, meat and energy.

Five years ago there may have been 150,000 vegans, while estimates range up to 3.5m now. As a consequence supermarkets are introducing vegan sections. In such a world, food producers and retailers that are alert to change will prosper. Greggs is a great example of this. The bakery food-on–the-go format introduced a vegan sausage roll recently and is enjoying a great consumer response.

In plastics, mainly thanks to David Attenborough, the public is focused on addressing the pollution problem. Once again, the corporate world is responding and one listed group, which we at MVAM now like, DS Smith which specialises in packaging, has announced the disposal of its Plastics Division to concentrate on sustainable product.

In UK energy, renewable technologies, led by wind and solar, produce over 30% of the electricity output, while investment in battery technology is gathering pace. At our recent Denbies event, the Ceres Power presentation highlighted the opportunity of its fuel cell technology bringing lower cost, cleaner energy to businesses, homes and vehicles. Some major oil companies are recognising the need to embrace this change, with Shell among the leaders as it focuses on becoming a low-carbon supplier over the medium term. Where oil demand goes in the next 20 years is one of the great unknowns. Meanwhile the European car industry is in turmoil in 2019, with a collapse in profitability. All of a sudden it is feeling the pressure of changing consumer behaviour, following the sharp drop in demand for diesel vehicles and the substantial investment underway in electric vehicles. Generation-Z may well not even buy cars in the years to come, switching to sharing schemes, when not on their bicycles. In conclusion, there has never been a time like today, where investors need to be so nimble, as Generation-Z begins to take control of the world. For as Bob Dylan warned, “you better start swimmin’ or you’ll sink like a stone”.