Home>News>July Newsletter: ‘Trade Wars. The end of the win-win situation?’
Back to news

July Newsletter: ‘Trade Wars. The end of the win-win situation?’

‘Trade Wars. The end of the win-win situation?’ 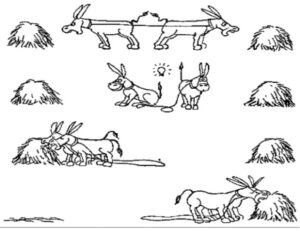 To understand the modern economy, how the world around you works and why many of us eat and live better than the kings of just a century or so ago, you just need to understand one word…growth.

For most of human history the economy stayed pretty much the same size. Any increase was perhaps due to population growth or the discovery of new lands. But per head production remained pretty much the same. Wars were fought to give the victor the spoils. In a world where there was no growth, you could only grow by making someone else shrink.

Something changed in the world that enabled it to grow. That change was banking. While there had been lending before, banking only really took off five hundred or so years ago, and with banking came credit.

The creation of credit demanded a new thing, a trust in the future. Why lend if you didn’t think you would get your money and a bit more back. The future had to be better, bigger. This win-win situation was described by Adam Smith in perhaps the most important economic publication of all time, The Wealth of Nations. He argued that once a landlord or shoemaker had greater profits than he needed to maintain his family he would hire others to increase his profits further. It followed, therefore, that an increase in profits for the shoemaker would increase the collective wealth. It would grow the economy.

And so, it has been, the win-win world. Banking, believe it or not, is one of man’s greatest inventions. So much so that today there is so much credit in the world the need for future growth has become an imperative rather than an ideal.

And that is why the investors are concerned about the possibility of trade wars, and (not unimportantly) Brexit for that matter. Because the hope for the future, defined by the borrowing of money, is invested in the factories, the businesses and the people of the world as it trades today, not as it would trade under tariff barriers. Disturbances to that trade mean new investments will have to be made without the old ones paying off. The future will not be of growth but of adjustment and possible decline.

For capitalism to survive, not only must someone produce the goods, someone else must buy them. The US has been the consumer (buyer) of last resort for at least the last two decades. Recent tax cuts suggest this may continue for a while, but it needs someone else to step up, and keep the show on the road. Tweets and brinkmanship may well be needed to push some countries to buy more goods, but if the result is trade wars it won’t be a happy ending.

A world where factories, innovation and discovery are financed by credit, is one which needs countries to pull together not apart. No wonder equity markets are a bit twitchy at the moment.