Home>News>June Newsletter: ‘The Beautiful Game’
Back to news 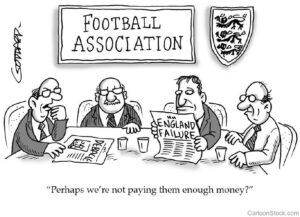 Here we are again, at that time in the 4 year cycle when all the leading Premiership footballers go on tour together for a month over the summer. They invite a few international football celebrities to make up the numbers, such as Messi or Neymar, but in reality this is the Premiership on tour. Manchester City have 16 players participating, while Belgium have a full team of 11 from the Premiership. If the financial health of your league is a good guide to your economy, then the UK (sorry England in this case, apologies Scotland, Wales and N.Ireland) remains in rude health. The Premiership goes from strength to strength in terms of its global audience. Amazon has just signed a deal to start streaming live games from 2019, alongside Sky and BT.

It may be a coincidence but there is one leading team that will be missing this football feast in Russia, for the first in over 50 years. Sadly, the Assurri will be on the beach eating some gelato or drinking an Aperol Spritz, rather than entertaining us again. The Italian football decline may be symptomatic of the country’s decline over the past 20 years, since joining the Euro. It has been encapsulated in the outcome of the latest elections. The anti- establishment Five Star and the right wing League have formed a coalition government, threatening to challenge Brussels and Berlin. In truth it should be no surprise to anyone, beyond the liberal elite with their heads in the sand, that populism will continue to gather momentum in the dysfunctional European economy. While Greece was small enough to gloss over the problems, Italy is different, as the 3rd largest economy in the Eurozone. In short, too big to fail. The problem is that the Italian economy has stalled for 20 years since the Euro was launched, epitomised by unemployment still over 11%, and some 3 million Italians on the dole. As a benchmark, that is similar to the highest ever in post war UK, back in the early eighties, when the country was in turmoil during the miners’ strike. Even if you are fortunate enough to have a job in Italy, the average wage is some 40% below the UK. This may explain why the Italian young are on the move, with villages abandoned to the old. As an example, the village of Candela, in Southern Italy has seen its population collapse from 8,000 to 2,700 and has recently offered £2,000 for families to live there. Good luck to the mayor.

What does this all mean for investors? The European economic model will continue to offer sub-par growth in comparison with the rest of the world, unless there is a radical change in thinking at the centre. Financial dogma based on austerity for the weaker nations, focused on fiscal rules that work for Germany but nobody else will doom much of Europe to slow growth at best. Companies that are more weighted to global growth beyond the Eurozone should outperform over the medium term. The Germans will continue to work hard, the French will continue to strike and Southern Europe will enjoy the weather.