Home>News>January Newsletter: ‘The Canary in the Coal Mine?’
Back to news

January Newsletter: ‘The Canary in the Coal Mine?’

‘The Canary in the Coal Mine?’ 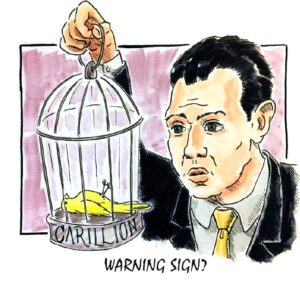 Almost everyone knows the nature of pyramid schemes such as chain letters and most of us do not participate. Probably because we correctly think there is a good chance we will end up at the bottom of the pyramid, holding everyone else up! Perhaps the most modern version of the chain letter is Bitcoin? We wrote about that last month. Whether Bitcoin is a pyramid scheme or not though is a bit of a side show to the biggest pyramid scheme in town….the business cycle itself. Yes, the business cycle resembles a pyramid scheme, in as much as its booms and busts are repeated over and over again.

“As long as the music is playing you have to get up and dance” was the great quote from then Citigroup CEO, Chuck Prince, in explanation of why his company ended up like so many others at the mercy of the 2008/9 financial crisis. It underlines perfectly why the cycle goes boom. Getting off the merry-go-round just as the ride hits top speed is pretty much impossible.

For investors then it is important, at any time, to be able to identify the stage of the economic cycle. It not only helps determine how much money you want to be invested in the stock market, but also, the sectors and indeed individual stocks that will give you the best returns.

The current business cycle really kicked off in 2010/11 when the “magic” of the central banks finally encouraged enough businesses and people to start borrowing again. The cause of the last financial crisis, too much credit, was the tool used to kick off the next cycle. Nothing new there, it’s been like that for centuries. The problem is that the need for governments to kick start things by artificially lowering the rate of interest creates distorted investment patterns which will sooner or later collapse the business cycle and consume much of the wealth that has been created.

Enter the canary, in the form of UK construction company, Carillion. Enticed by those artificially low interest rates it borrowed heavily. Using that cheap money, it then bid too aggressively for government contracts acquiring businesses that would only ever achieve very low returns. Effectively the low interest rates encouraged the company to misallocate resources to projects that would never pay off. Its demise signals that the oxygen provided to kick start the cycle is starting to get a little thinner.

So, panic then? No, not just yet. Carillion helps us focus the mind on the fundamentals of the economy and the businesses we invest in. There will be other collapses before the cycle really turns down. But the music is getting louder and more mesmeric. We’re not ready to take our leave from the party just yet but the time to dust down the investment processes for less buoyant days is getting nearer.