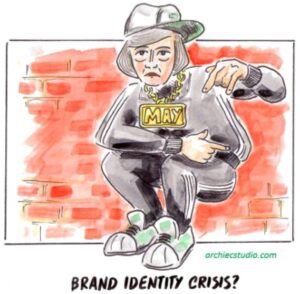 A brand given to a product or service, takes on an identity by itself. It is akin to a living being, having an identity and personality, a name, culture, vision, emotion and intelligence. For investors, finding a company with a good brand is often very rewarding. A strong brand enables the product or service to be sold at a price well above the cost of making it.

Countries have brands too, and the strength of that brand has an impact on the economy, in a similar way a consumer brand has on a company’s profits. Think Switzerland and chocolate and cuckoo clocks spring to mind. Think Nigeria and you won’t be packing any bags to go there on holiday. Like company brands, national brands can change, improve or be damaged overtime. Over the last twenty years Britain has been successfully rebranding itself into “Cool Britannia”.

The term “Cool Britannia” came from a 1967 song title by the Bonzo Dog Doo Dah Band. The term disappeared before coming back in 1996 as a trade mark for one of Ben and Jerry’s ice creams. It seemed to capture the increasingly positive mood of the country following the tumultuous 1970’s and 80’s. Britain had the chance to rebrand itself, away from the image of a strike torn, class riven society.

While perhaps unintentionally, policies from its urbanite leaders Blair and Cameron, and the coup-de-gras of stealing the 2012 Olympics from under the nose of Paris, propelled this image globally. The Olympic opening ceremony showed what “Cool Britannia” was all about. It was all about the brand. James Bond, the Queen, David Beckham and Brit-Pop music displayed the stylish Britain of today, rather than the Britain of yesterday. The world loved it. London tourism has soared since 2012 and it is now the world’s most visited city in terms of international visits! Even sales of iconic British car marques, such as Land Rover and Mini, have seen unprecedented sales booms, something unimaginable in the pre-Cool Britannia world.

Now things have changed. Heralded by the Brexit vote, and followed by an increase in racial incidents, weak political leadership and, even, the tragic image of the poorly clad London tower block. The culture, vision and emotion has changed. Britain’s identity no longer fits “Cool Britannia”. The repercussions are likely to be felt in the economy, not only through fewer tourists and less flats sold to foreigners, but through destabilising moves in markets, notably the currency markets, with potential to further fan the flames of inflation and perhaps may even result in a left-wing government whose lack of credibility is only surpassed by the incompetence of the current government.

It takes a long time to build a brand, but destroying it is much easier. The Bonzo Dog Doo Dah Band played their final gig in 2012, forty-five years after Cool Britannia. It may take a similar time for “Great” Britain to reformulate its brand to be cool again. The economy needs a quicker re-branding exercise.