Home>News>May Newsletter: ‘…. But Put the Blame on Us’
Back to news

May Newsletter: ‘…. But Put the Blame on Us’ 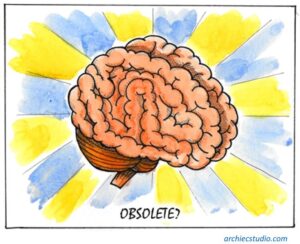 Last month we ended the newsletter highlighting that one of the world’s largest investors had turned the management of its funds over to computers. Smart maths can identify patterns in markets determining the likelihood of future events. Such “quantitative” investment tools have been around for a while, the majority of trades on the stock market are made by computers. Relying on humans, as the theory goes, doesn’t get the results. What’s more, to deny this progress would render us akin to Luddites, that group of 19th century English textile workers who destroyed weaving machinery to protest against the redundancy of their traditional craft.

So here at MVAM, where the humans still pick stocks, are the company’s employees and its clients today’s luddites? Can MVAM portfolio managers’ really get better returns than machines?
Well, of course we make no promises, but we put forward the following reasons as to why computers may not be the answer:

An indeterministic system is one with an element of randomness. Prior events do not determine what happens next. The stock market is an indeterministic system and computers that work in a deterministic way, don’t tend to cope well when surprise events occurs. In 1997, a fund called Long Term Capital run by computer programmes, with Nobel Prize winning professors as directors, exploded losing $4.6bn. Similarly in August 2007 Goldman Sach’s Global Opportunities fund was one of many caught in the “quant quake” losing more than 30% in a week. Expect computerised investing to continue to do okay most of the time and then suffer massive blow ups. Something we call “small gain, small gain, big loss investing”.

SECONDLY, as the computers use past events to determine future outcomes they all pretty much do the same thing. That’s why we see quick swings in markets these days. Designed to spot a bandwagon they do so effectively. As more and more stock market participants “think” the same way, the unexpected rut in the road creates the “flash crashes” we now see.

AND FINALLY, let’s be honest, life is about relationships. Relationships with other humans not machines. It’s good to speak to the person who makes decisions on your savings, who knows you and understands your needs. We will get it wrong at times and at MVAM we will put our hands up (because we can) and take the blame – we are only human after all.