Home>News>January Newsletter: ‘Cycles never go out of fashion’
Back to news

‘Cycles never go out of fashion’ 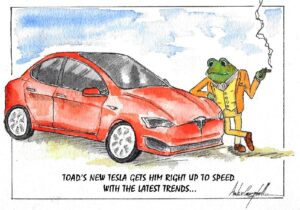 It’s that time of year when we opine on what’s in, what’s out, what’s hot and what’s not! For 2017, the focus is unsurprisingly on global politics: Brexit and Trump’s victory in the US Presidential elections receive the most attention but we mustn’t forget Putin’s muscle flexing in war torn Syria, Renzi’s resignation in Italy and the forthcoming elections in France and Germany. There is much to talk about and indeed much of that talk is of a ‘new paradigm’ of ‘populism’. The working (and middle?) classes of the West have rejected globalisation and the ‘unfair’ distribution of wealth that it has created and railed against the establishment that has been seemingly indifferent to it all. We are entering a new era….

It’s also the Panto season, and some of you may have been lucky enough to take in the marvellous adaptation of Kenneth Grahame’s Wind in the Willow’s at Kingston’s Rose Theatre over the holiday period. As is often the case with children’s stories, there are more serious messages that lie behind the tale of loveable creatures on the riverbank. Even if you didn’t get to see the show, no doubt you remember the story. The arrogant and irresponsible elite (“Mr Toad”) is taught an unpleasant lesson by an angry, hungry and disenfranchised underclass (the “Wildwooders”). Sound familiar? And Kenneth Grahame’s book was published in 1908, long before Donald Trump or Nigel Farage were even born. A popular interpretation is that through the folly of Toad’s dangerous obsession with the motor car, Grahame is voicing his antagonism toward the impact of industrialisation on Edwardian England and mocking the English class system. In other words, we have been here before. Rather than a new paradigm, we are simply experiencing a new political cycle. Like all cycles, there are elements of difference, but they are also essentially the same.

As investors, we obviously have to be wary of cycles and we have written recently about the near/medium term direction of bond yields, the focus on more nationalist agendas (read protectionism), the re-emergence of inflation (particularly here in the UK) and the impact these might all have on equity markets. But many of the investment decisions we make still have little to do with political or economic cycles, and are driven by much more resilient underlying secular themes, or so-called ‘mega-trends’ which provide new and growing opportunities for companies. These include population growth and urbanization and the pressure this puts on infrastructure and resources (particularly water), the ageing population and the increasing demand for healthcare (we particularly like new technology that drives cost out of the healthcare system), disruptive technologies (hasn’t the Electric Vehicle caught on faster than anyone thought possible?) or the transition to a low carbon world. Picking stocks that fit into these themes should generate attractive returns over the long term, irrespective of whether Trump builds his wall or Europe disintegrates.

As for the current political climate, just like in Wind in the Willows, at some point common sense will prevail and order (albeit a new order) will be restored. Things might even get better. Until the next cycle that is…