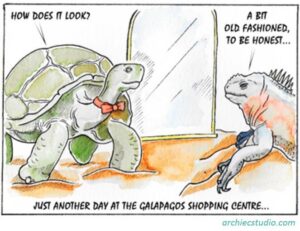 Something that Darwin omitted to mention when writing about the Galapagos Islands is the wonderful shopping centre. It’s a buzzing, vibrant hub for the local species, with the iguanas and turtles checking out that nothing ever changes in terms of fashion and consumer trends. At its centre stands M&S, alongside BHS, C&A, Woolworths, Our Price and Bejam. There is no broadband or mobiles phones, while Amazon is something that a few of the birds noticed on their travels above South America. If only…..

This fantasy world epitomises the continual challenges facing managements and investors. Nothing stands still beyond the Galapagos. This is sadly proving too true for a giant tortoise named M&S, in a week that the group announced another set of dismal results, suffering falling profits and clothing sales. The retailer has been running hard, backwards, for the past decade, while the Mrs M&S that the CEO embarrassingly talked of recently just doesn’t exist in 2016. This has prompted, at long last, a store closure plan. Who needs over 900 UK stores in the digital age, given online sales account for 15% of spending, with growth still accelerating? Unfortunately for M&S it is hard to downsize in retail successfully, avoiding a vicious circle of successive cuts.

One of the secrets of successful investing is identifying the winners and losers from change and who is best able to embrace and exploit the profitable growth opportunities which emerge. M&S has never looked capable of evolving at the necessary speed, given where it started. In contrast two of our stocks within the MVAM Inheritance Tax portfolio have been big winners to date in the new world of e-commerce, namely Boohoo and Gear4Music. The former has proved a hit with young fashion conscious consumers, while the latter is on track to become one of the leading online musical instrument retailers across Europe, with multilingual, multicurrency websites. This highlights another feature of the world today. The real business borders are much less clear cut in the internet age. For example as sterling has collapsed since 23 June consumers across the world have shopped at the great UK shopping centre in the clouds.

While successful investing involves picking the growth companies of the future before this is reflected in their valuations, it does entail risk. Many online retailers have and will fail. There will always be losers as an earlier generation discovered with canals and railways. In recent times Blackberry and Nokia ‘phones have gone from hero to near zero in a short space of time, while Twitter’s corporate history may be written one day in little more than 140 characters. At this moment in time there are two very different evolutions which have caught our investment eye at MVAM; electric cars and graphene, which was only discovered in 2004. These may both change some industries out of all recognition. Our challenge is to make sure we avoid the M&S of those industries, while finding the emerging stars. Meanwhile back on Galapagos all will remain serene, hang on…..is that “Sir” Philip Green rowing past in his rubber dingy,looking hot and sweaty?