Home>News>July Newsletter: ‘In for a Pounding Either Way’
Back to news

July Newsletter: ‘In for a Pounding Either Way’

‘In for a Pounding Either Way’ 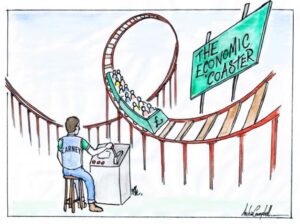 “The wavelike movement affecting the economic system, the recurrence of periods of boom followed by periods of depression (recession) is the unavoidable outcome of the attempts, again and again, to lower the gross market rate of interest by means of credit expansion. There is no means of avoiding the final collapse of a boom expansion brought about by credit expansion. The alternative is only whether the crisis should come sooner as a result of a voluntary abandonment of further credit expansion or later as a final and total catastrophe of the currency system involved” – Ludwig Von Mises

In a post-Brexit world the above quote from the Austrian economist tells you perhaps all you need to know about what is happening here in the UK at the moment. The statement implies that to understand the business cycle you have to understand the relationship of money, interest and credit, and the effect of the expansion of credit on the economy. Perhaps we should send it to the Bank of England (BoE)?

The BoE now has the highest paid central banker in the world – Mark Carney, so he should understand the above (although England also had the highest paid manager at Euro 2016 – let’s not go there!). Soon after taking up his job, Mr Carney pronounced he would increase interest rates when unemployment fell below 7%. So he did understand….but then he didn’t follow through, and interest rates didn’t move. Now, as unemployment falls to 5%, he is set to take interest rates to zero. This leads to the conclusion that he kept the “gross market rate of interest” too low as the economy took off and now with the impact of BREXIT he is trying to lower that “gross market rate of interest” again in an attempt to keep the economic expansion going.

The result as we have seen since BREXIT is about a 10% fall in the value of Sterling. Enough you ask? Very unlikely. The UK imports much, much, more than it exports. In fact, as a percentage of GDP, its current account deficit (exports minus imports) is larger than at any time, apart from during World War II! This has been allowed as we have kept interest rates too low to keep growth going. Blaming Mr Carney alone may be a bit much. The lopsided state of the UK economy has also not been helped by the politicians. Having made the BoE independent, they seem to have abdicated any responsibility for driving the UK economy. This now apparently seems solely the job of an unelected BoE committee. Weren’t we leaving the EU to get away from unelected bodies ruling our lives?

Rewind 25 years, when John Major was PM, things were different. While his quote “if it isn’t hurting it isn’t working” didn’t go down well with the media or the many who suffered negative equity at that time, the accompanying 16% interest rates certainly signified a “voluntary abandonment” of the credit expansion that had taken place in the late eighties. Painful as those negative equity years were, it did reset the economy. Taking the tough choices seems to be off the current agenda. The BREXIT vote
has revealed what was really there already. The Sterling story is like the emperor with no clothes, but with nobody around taking responsibility to re-dress 🙂 the issue, investment decisions across the land will be premised on further Sterling weakness.