Home>News>June Newsletter: ‘Once more unto the breach dear friends, once more…..’
Back to news

June Newsletter: ‘Once more unto the breach dear friends, once more…..’

‘Once more unto the breach dear friends, once more…..’ 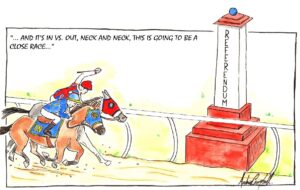 MVAM has no wish to push opinions on the upcoming referendum but we do have to keep focusing on it. For the investment world it is the only game in town. This time we look at what might happen.

We don’t make predictions (see May 2015 newsletter) but the likely short term effects of a vote to leave are becoming clear. And if there is one thing clear about markets it is they are great at over-reacting to news, especially big news. An overreaction is what we are about to see, one way or another.

Firstly, the basics. A vote to Leave will be seen as negative and a vote to Remain positive. Not because leaving the EU would be such a bad thing (who really knows) but leaving will create a fear of change. That fear will create the overreaction that, we think, will cause a problem in the real world. So Brexit predictions are:

Investors have asked if our portfolios are prepared for the vote. Our answer in a word is “No”. Surprised? Well perhaps its honesty, but it is difficult to prepare when a vote Out will have the exact opposite effect on a portfolio as a vote In! With the polls suggesting a neck and neck race who are we to know? What we can do is prepare for the inevitable overreaction. The stocks we like that get hit too hard by the verdict will be worth buying and vice versa.

So “once more unto the breach…” go markets, somewhat ironically as this quote comes from Shakespeare’s Henry 5th speech made before Agincourt, the battle that almost led to Henry’s conquering of France. Shakespeare’s words in that same speech sum up the final days of this less bloody campaign as well. “The game’s afoot: Follow your spirit, and upon this charge cry ‘God for Harry, England, and Saint George!”

After the weeks of debates, “facts” and predictions – follow your spirit – remains the only opinion we are prepared to give.