Home>News>May Newsletter: ‘Should we stay or should we go now…’
Back to news

May Newsletter: ‘Should we stay or should we go now…’

‘Should we stay or should we go now…’ 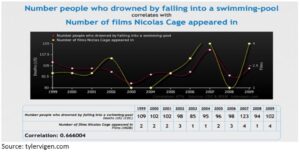 The investing world spends most of its time looking for correlations, especially these days when computers do most of the trading. The problem is that computers, if they only looked at the above data to make decisions, would probably try and have Nicholas Cage arrested if he decided to make another film! The mixing up of cause and effect isn’t of course just a computer problem, after all didn’t the egg come before the chicken??

This cause and effect problem really is rearing (almost a joke there!!) its head with the current Brexit debate as each side picks data that surely justifies you to vote with them – the EU has helped our prosperity, we are better off than we were when we joined, the inflow of immigrants has been caused because we are in the EU….The facts are we are better off and we do have more immigrants, but is our membership of the EU the cause for this?

Below are some questions, the answers to which may have been effected by us joining the EU or then again perhaps not. The answers may be surprising to you and may make you wonder why it’s the UK and not other members having an EU referendum. Or is this just confusing cause and effect……?Answers are on the back page. Do you know what you are voting for??

1. Which of the following nations was the poorest major European country when joining the EU?

5.  Which country has had the most European Cup/Championship’s League wins since the UK joined the EU?