Home>News>November Newsletter: ‘You’ve Never Had It So Good’
Back to news

November Newsletter: ‘You’ve Never Had It So Good’

‘You’ve Never Had It So Good’ 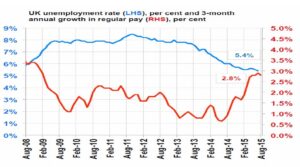 Homo sapiens (correctly written this month!!) in general and politicians in particular are good at spotting trends but normally only once they are peaking and about to change.

Former Labour party leader Ed Miliband was excellent at this. He championed freezing utility bills just as they were about to fall. He then emphasised squeezed living standards just as they were about to rise, with real wage growth (see graph above). Ed of course is not on his own. Famously back in 1958 the then Conservative prime minister, Harold Macmillan coined the phrase “You’ve never had it so good”. But by 1961 Macmillan’s government imposed a wage freeze as Britain suffered a balance of payments crisis (importing more than we exported) and he lost the next election. The Economist wrote an article headed “You’ve Never Had It So Good” in February 2007……6 months later Northern Rock were going bust – we are all pretty bad at this aren’t we.

So why are we writing an article with the same heading now?? Well, if you are in employment it’s pretty good at the moment. Wages are rising while oil prices, utility bills and food costs are all falling. In July 2014 the big five supermarkets recorded the first ever month where they all saw prices fall. It’s been pretty much that way ever since. The country is booming with jobs aplenty. So look out for a Cameron or Osborne speech to underline where we are in this economic cycle. But what can derail us?

In the short term the most predictable thing is, perhaps surprisingly, the weather. El Niño is coming and coming hard. El Niño is a global weather pattern that forms when ocean waters off Ecuador and Peru become warmer than normal. At present the sea water temperature recordings are the most significant in recorded history barring 1997. The last time we were close to the current El Niño conditions was the autumn/winter of 1997/1998. According to National Geographic “it rose out of the tropical Pacific in late 1997, bearing more energy than a million Hiroshima bombs. By the time it had run its course eight months later, the giant El Niño of 1997-98 had deranged weather patterns around the world, killed an estimated 2,100 people, and caused at least US$33 billion in property damage”. In Central Europe if you remember there was record flooding that killed 55 in Poland and 60 in the Czech Republic.

It is an investment manager’s job to look for the clouds at a time when it all seems to be plain sailing. True most commentators these days believe every cumulonimbus to be a portent of doom in the making. In this instance we may just adjust our investment course a little by buying some shares that will benefit from rising food prices. The weather is unlikely to blow the current UK economic growth completely off course. Just expect to be paying a little more for food next summer and take some wellies on your European vacation.