Home>News>September Newsletter: ‘Have you been watching…?’
Back to news

September Newsletter: ‘Have you been watching…?’

‘Have you been watching…?’ 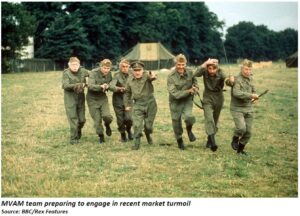 “Don’t panic, don’t panic” and “Wur doomed” may have been two of the best catchphrases from the BBC sitcom, Dad’s Army, but it seems equally apt this August for investors, as global stock markets experience extreme volatility and suffer sharp losses. At MVAM we certainly believe that these market setbacks present positive opportunities for investors, with anything but a very short term time horizon.

The culprit for the recent mayhem across the markets has been China and this has been an accident waiting to happen for a number of months. Misguided Chinese government policy prompted a 150% jump in the Shanghai index in the year to June 2015. Unsurprisingly, the bubble burst and a 40% correction has returned the index back to where it started the year. It is very debatable how much read across from this bubble there should be to markets in Europe and US.

Maybe more importantly the underlying Chinese economy is undoubtedly slowing down. The problem is there are “lies, damned lies and statistics” which may have been incorrectly attributed to Disraeli by Mark Twain in the last century, but could just as easily be quoted when discussing the current Chinese economy. In short, nobody believes the numbers coming out of China, including the Prime Minister, Li Keqiang. If we take the reported numbers at face value China may still be enjoying 7% growth, but what unnerved investors on 11 August was the government’s decision to devalue the currency, the renminbi, which had been pegged to the US$. This suggested all was not well with the underlying economy, and needed a cheaper currency to stimulate growth. This has been followed on 25 August by a cut in Chinese interest rates. The combination of a more competitive currency and lower interest rates should help to support the Chinese economy and reassure markets.

In contrast, the largest economy in the world, the US, is in fine shape, enjoying the benefit of low commodity prices (thanks China), especially oil, rising employment, a strong housing market, and high consumer confidence. The main investor concern had been that all this positive data would prompt a rise in US interest rates in September. The good news is that the latter may have been pushed back by recent weakness in the global stock markets. The UK is in a very similar position to the US, in terms of an increasingly strong economic recovery and the threat of higher interest rates. Again, the latter may well have been pushed back by recent events.

So for investors is this a great buying opportunity, given the UK market is down 15% from its April high and 10% in the year to date? We believe the answer is yes. The economic recovery will not be derailed in the US/UK, with low oil prices and low interest rates underpinning the growth story. Against this background we at MVAM look forward with confidence, seeking out those investment opportunities across the market thrown up by the recent market correction. This is a good time for active fund management.