Home>News>April Newsletter: ‘Still Building Our Own Easter Island?’
Back to news

‘Still Building Our Own Easter Island?’ 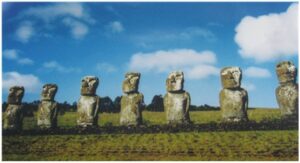 Nearly three years ago I wrote a report regarding the demise of the Easter Island civilisation. One theory as to why that advanced society disintegrated was that the building of the Maoi statues misused the productive resources of the island to such an extent that when times became a bit tougher the society was unable to withstand the change and suffered a catastrophic collapse. Moving the Maoi’s across the island needed trees to be cut down until none were left. This may have eliminated the materials required to build things such as fishing boats. Human effort was concentrated on the manufacture of the non-productive Maoi’s. This misallocation of resources, hurt productivity (e.g. amount of fish that could be caught) to such an extent that the civilisation itself died out.

In 2012 the newsletter suggested that the world was seeing a misallocation of resources on a scale that will materially impact our future wellbeing. We noted the rise of West London property prices and the gold price as the examples. Quoting Warren Buffett, “You could take all the gold that’s ever been mined, and it would fill a cube 67 feet in each direction (two Olympic size swimming pools). For what that’s worth at current gold prices, you could buy all – not some – all of the farmland in the United States. Plus, you could buy 10 Exxon Mobils (the world’s largest company), plus have $1 trillion of walking-around money. Or you could have a big cube of metal. Which would you take? Which is going to produce more value?” Gold at the time of the report was $1,800 an ounce. Today its $1,200. Does that mean we are doing better with all this printed money now?

Well no. Today the Bank of Japan is still printing money, and has used those new Yen notes to become the largest shareholder on the Japanese stock market. Those shares have not been bought by looking at the prospects and qualities of the individual companies but just bought on mass through index related funds. The ECB, is itself not buying the stock market, but its massive printing of money has helped spawn massive index related fund issuances (mainly ETFs which are the very antithesis of our investment beliefs here) that reached Eur500m in just one day last week. This is sending stock markets flying but is not trying to allocate resources to the most productive assets, just the biggest ones. It is just trying to find A place to invest rather than THE place to invest. “Good Craig”, I hear you say, “give me my money back from your focused individually selected stock portfolios and I’ll have some of these ETFs…. they’re going up”.

But hold on a moment there is a reason to bring all this up again. The major player, the US Federal Reserve, may be about to put the presses into reverse. That will be signaled when interest rates are put up for the first time since 2006. But the Fed, and indeed the Bank of England, are dallying. Remember the highly paid BOE governor saying he would start raising interest rates in the UK when unemployment got to 7%. It’s now 5.8% and heading lower. Why the dallying? Perhaps as with Easter Island there is concern that a slight change to the environment of free money we have become used to may be too tough for our society to survive. The high tide has lifted all boats, and it has been an unprecedented tide. When the tide turns just make sure your money is invested in productive assets and not just those in the most convenient place.