A Meze is a Greek speciality, a selection of small dishes whose main purpose is to complement and enhance the taste of the drink and provide a back drop to social gatherings. Recent social gatherings in Greece however have been less akin to a dinner party, more akin to a riot as the Greek economy turned itself into a meze. All this blew up two or three years ago and got us all worried about, well just about everything. Then it seemed to go away, but here we are again.

The numbers are now even more scary . Greek debt, at some €250bn, is 175% of GDP and growing. In the event that Greece leaves the Euro, the total cost to the Eurozone has been estimated to exceed €350bn! This however should easily be covered by the European Central Bank, which recently committed to money printing at a rate of €60bn/month!!!. This means if Greece does leave the Eurozone, any contagion, caused by speculators trying to force other countries out of the Euro should be contained.

In fact, these potential losses are a drop in the ocean within the global context. The Greek population is around 10 million out of 7 billion and the economy represents less than 2% of Eurozone GDP, or around 0.3% of global GDP. Even after the recent slowdown China generates an economy the size of Greece roughly every three months and a population in about ten!! The world won’t end if the Greeks leave the Euro.

OK, but it’s not just about the debt. It’s also about the wider European ‘project’ and the belief that European competitiveness can only be achieved through economic reforms amongst the troubled periphery. It’s hard not to have sympathy with this view. After all, those countries that have stayed on the reform path such as Portugal, Ireland and Spain are now seeing a return to growth.

In fact, economic conditions in the wider Eurozone are improving despite the uncertainty over Greece. The lower oil price alone is providing a stimulus that could add at least 2% to Eurozone GDP, enough to outweigh any drag from Greece. Consumer confidence in the Eurozone as a whole hit a seven-and-half year high in February. Not only would a Greek exit be manageable for the Eurozone, but it may even lead to greater efforts by the remaining member states to place Europe on a more stable platform for the future. That would be no bad thing. 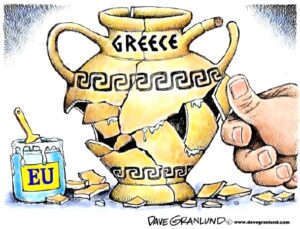 So worry more about the Greek people rather than the impact Greece will have on you. Currently its making the summer holiday spending money go much further. If you want to worry about European recovery look East to Russia and Mr Putin. Countries closest to Russia’s borders have been increasing their spending on defence, whilst the bigger European nations such as Germany and the UK have made drastic cuts. A signal of change came from the German Finance minister last week announcing that “of course, in view of the crises and instability in the world, we have to shoulder higher spending on in the next few years.” Now that would be a real Meze….