Home>News>November Newsletter: ‘Cash not needed for Mrs Watanabe’s global casino’
Back to news 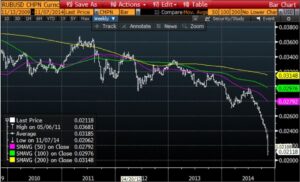 Source: Bloomberg
As the West rejoices falling oil prices some parts of the world aren’t benefitting. The above graph shows the collapse of the Russian rouble against the US Dollar. The Japanese Yen isn’t far behind. Oil prices may have fallen in dollar terms but think of it for the average Russian or indeed Mrs Watanabe.

Mrs Watanabe is the generic name for the Japanese housewife, who seeks the best use of her family’s savings. Though historically risk-averse, Mrs. Watanabe became a surprisingly big player in currency trading during the past decade in order to try to make a return on her savings as interest rates have been virtually zero. Bank of Japan officials said in 2007 that the housewives’ trading activity helped to stabilise currency markets because of their tendency to buy on dips and sell into rallies.

The problem for Mrs Watanabe is making her savings grow, as a 5% drop in September’s Japanese consumer spending figures show. To compensate it seems she appears to be more active on currency markets than ever. The value of the Yen has fallen 38% against the dollar in two years meaning petrol prices in downtown Tokyo are higher than two years ago!!

What Mrs W is doing is making the most of what is called the “carry trade”. This is the name of the strategy of going short (betting the foreign exchange value will fall) in a low-interest rate currency such as the Japanese yen, while simultaneously going long (betting the foreign exchange value will rise) in a high-interest rate currency. When money is free to borrow as it is now in Japan it almost doesn’t matter which currency to go long in.

The problem is a significant amount of this trading is carried out through online margin accounts. Accounts that let you “invest” much more than your actual savings. Mrs Watanabe can buy 20 to 100 times more in a margin account than her actual savings. This “leverage” is a major reason why these currency movements are so fast. Don’t get me wrong speculation can have a positive role, but the size of the global currency markets mean it is just a global casino and in casinos you have winners and losers.

I’m not sure what the generic term is for the Russian housewife, but I am sure “Mrs Ivanov” is not really into currency trading. When currency movements get to extreme, as in Russia now, there are often dire consequences for the country and sometimes its surrounding neighbours. The Ukraine situation is not a chance happening. It is the consequence of the global casino that no-one seems to want to shut down.