Home>News>‘It’s All Greek to Me’
Back to news

The saying ‘It’s all Greek to me’ comes from a William Shakespeare play Julius Caesar, where Casca says of a speech by Seneca deliberately given in Greek so that some would not understand it, “For mine own part, it was Greek to me.” 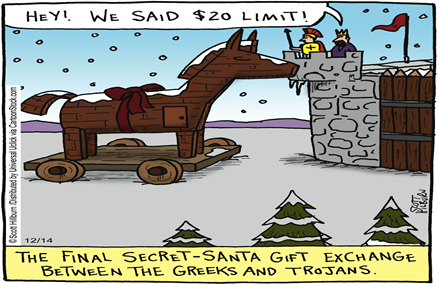 The world these days seems to be using the Greek language to simplify things rather than complicate them. The use of the Greek alphabet to define Covid variants being the current example. Back in May 2020 which seems so long ago, when South Africa produced its first variant, they called it 501Y.V2. Other naming schemes called it B.1.351 and the media called it the South African variant. To stop confusion and geographical stigma the World Health Organisation (WHO) suggested using letters of the Greek alphabet to make things simple, Omicron being the latest example of course. Let us hope they do not get to Omega, which is the last letter of the Greek alphabet, although Omicron is the 15th so unless I have missed something the WHO are jumping around a bit.

Apart from the revelation of a regulatory body trying to simplify things, the use of the Greek alphabet as a naming convention is nothing new. We all remember Pi from school maths classes. Financial markets too use Greek letters. You may have heard Alpha and Beta. Beta is the return generated from an investment portfolio that can be attributed to overall market returns. Alpha is the portion of a portfolio’s return attributed to an investment strategy’s ability to beat the market, or its “edge”. All active portfolio managers, such as MVAM, try to produce positive Alpha. If you have been a client of MVAM’s for an extended period of time you know that sometimes Alpha will be positive i.e., we are doing well, and sometimes (normally for shorter periods of time of course) the Alpha is negative i.e., we are doing poorly, relative to the market.

The Greeks are not just an alphabet though. Indeed, it is a Greek word that is likely to be highly prevalent in the investment world in the next decade. That word is Meta. You may have heard that Facebook has changed its name to Meta recently and while there are certainly questions about the ethics of founder Mark Zuckerberg it is hard to question his vision. Its name change reflects the belief that the Metaverse will be a big growth driver of corporate profits in the next decade. The Metaverse is effectively the internet in 3D, where the real world is mimicked and social interactions and importantly goods, are exchanged for money without those goods actually being ‘real’. Sounds weird doesn’t it but it is where we are heading.

The Metauniverse’s impact on investment returns over the long term is likely to be huge. However, for 2022, at least for the first few months, the direction of the market will be more determined by how much further we need extend our knowledge of the Greek alphabet than the Greek language.

This is our final newsletter of the year so to our clients and everyone else who has read our newsletter this year, thank you and “Kala Christougena”.