Home>News>June Newsletter: ‘I used to believe in forever, but forever is too good to be true’
Back to news

June Newsletter: ‘I used to believe in forever, but forever is too good to be true’ 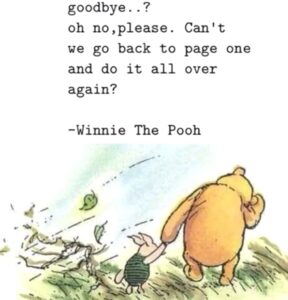 Philosophy is often turned to at times of stress as studying it helps us understand our view of the world. It puts things into perspective. While the likes of Plato and Confucius are known philosophers one of the greats, Winnie The Pooh, often gets overlooked. One of his pronouncements ”I used to believe in forever, but forever is too good to be true” points to a truth that we all mostly want to ignore. That everything has to come to an end. While some endings can be happy, such as the end of a war, most create a period of turmoil. So much so we try and put off endings, we want to believe in the ‘forever.’

The current economic ending we are trying to put off ‘forever’ is the end of the credit expansion. Since the great financial crisis of 2008/9, we have used credit, debt that is, to get us out of, well debt! Yes, we have printed money to avoid the pain of ending the credit expansion back then. But now we are at the stage when all that printing of money is creating inflation. Printing money during Covid has not helped. Money is chasing goods and services that are just not there. We all want to go on holiday all of a sudden. But, surprise, surprise, there are not enough air staff to cope. Everywhere we hear of shortages and prices going up. We are not used to this.

So, what can we do about all this? Well, we have a choice. We can voluntarily end this credit expansion. Bring it to an end by putting up interest rates and creating the inevitable recession. Or we can try and keep that credit expansion going. Let us say the UK government could give everyone £400. Wow a £400 hand out that would be lovely. And that is what has happened. What shall we spend it on? How about a flight to Spain? Many others may think to spend the ‘windfall’ in the same way!! That is an example of keeping the credit expansion going. Money created from nothing with nothing new to buy. So, the paper money chases prices higher as people compete for a finite amount of goods and labour.

The US by raising interest rates now, is finally voluntarily abandoning the credit cycle. The rest of the world is reticent to follow. The UK is increasing rates at just 0.25% a time versus 0.5% in the US. The European central bank has yet to start. China is cutting interest rates to keep things going while Japan continues to buy its own government bonds to keep interest rates low. These countries are hoping for the ‘forever.’ However, attempting to maintain the credit expansion will have one certain impact, a collapse of that country’s currency. Already the Yen has fallen 30% in value versus the US Dollar since the beginning of 2021. The Euro is down 14% and Sterling down 10%. The Chinese Renminbi has fallen 5% in the last 8 weeks. Expect more of the same, even a precipitous collapse of those currencies if these countries continue to put things off. To take that action perhaps the governments and central banks need to believe in Winnie the Pooh that  You’re braver than you believe, stronger than you seem, and smarter than you think.” But then again, I can see why some of them don’t….