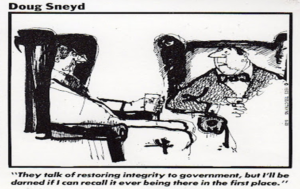 Now that is some time ago and admittedly the year is picked a little out of the air. But for one fact. No, not government integrity as the 1973 cartoon above would suggest, but the fact that 1973 was the last year when oil demand exceeded oil supply capacity. 1973 was the world’s most recent energy crisis. The oil price rose by 200%. Since then, OPEC, for all it’s bad press, has kept “spare capacity” and sheltered us, most of the time, from extreme price volatility.

We have all heard about creaking global supply chains. But we tend to think about the microchips in cars or phones, roof tiles, bricks or even turkeys. We don’t immediately think of the oil supply chain. Funny really. As supply chains go it doesn’t get much bigger. The oil supply chain is under pressure for a variety of factors.

So, what’s making us think of 1973 in particular? Well, it’s the struggles OPEC countries are having themselves. OPEC sets quotas of oil production for their members to follow. However, over the last few months OPEC countries have struggled to even get to their quotas. Normally they are ‘cheating’ a little by oversupplying. The current lower production suggests that the “spare capacity” isn’t really there, hence the price rises we are seeing. If Omicron turns out to be the final severe Covid variant, then oil demand could well out strip supply in 2022.

Now 1973 gets a bad press, inflation rising, the Watergate scandal and in the UK the energy crisis led to the government imposing the ‘Three Day Week’ where the commercial consumption of electricity was limited to three days a week. School however, I can tell you, continued to be 5 days a week. But it wasn’t all bad in ‘73. The Vietnam War ended, the US legalised abortion and the American Psychiatric Association voted 13–0 to remove homosexuality from its official list of mental disorders. Bob Stokoe danced across the Wembley turf as Sunderland AFC won the FA Cup – those were the days. Perhaps more importantly than all that was an invention by Martin Cooper. Born in Chicago to Ukrainian Jewish immigrants, Martin, an employee of Motorola, invented the first handheld mobile phone. The first mobile phone though wasn’t sold until 1983. These new technologies take time to revolutionise the world. Martin though is still alive, aged 93 meaning he has almost certainly been a beneficiary of not just his own inventions during the last 49 years.

So, this year as energy prices spiral, and stock markets jump around, it may not feel the best of times. But be sure the technological inventions of today will improve the world and the prosperity of its inhabitants tomorrow. We may have to be a little patient but luckily life for most of us is long these days.